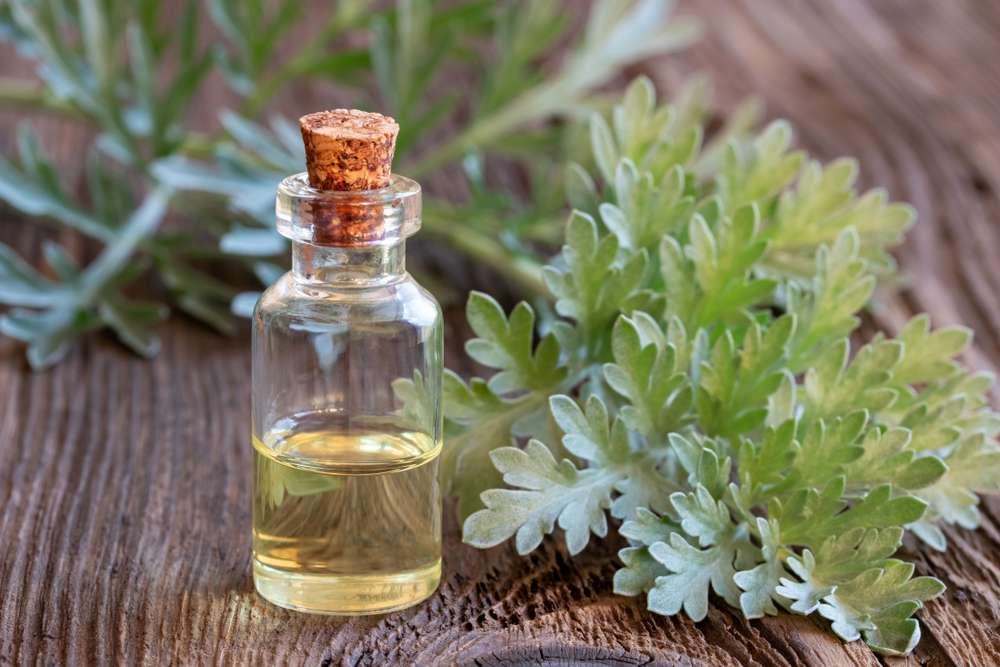 Wormwood has a storied past. Many famous artists and writers used absinthe as a drink made from wormwood, anise, and fennel. Because of its potency, absinthe is banned in the US and many other countries. However, it’s available in some countries in Europe if you are inclined to try it.

Wormwood has properties that aid many common and serious health concerns. Wormwood is actually used to eliminate intestinal worms, especially roundworms and pinworms. This is exactly why it’s commonly recommended as part of a parasite cleanse.

Wormwood contains a key ingredient for the herbal medication artemisinin, which is a powerful anti-malarial. Scientific research shows that wormwood can kill cancer cells. And, wormwood tea can treat anorexia, insomnia, anemia, a lack of appetite, flatulence, stomach aches, jaundice, and indigestion.

If you want to try wormwood, seek out high-quality products like “Gut Hero” from Soul CBD for its positive medicinal effects.

Artemisia absinthium is a perennial that belongs to the Asteraceae or Compositae family, more commonly known as the daisy family. This artemisia plant releases an aromatic odor and has a spicy, bitter taste.

Many species of the artemisia family tend to have medicinal properties. It’s related to Artemisia vulgaris, or mugwort, another medicinal herb. The wormwood plant is native to Europe and parts of Asia and Africa. It has been brought to the U.S., and it grows wild frequently along rural roads and paths.

Wormwood can be used either fresh or dried. The stem, leaves, and flowers have medicinal uses, and wormwood tea is a common aid for various ailments.

The essential oil is extracted from the leaves and flowering tops by steam distillation. One study of the essential oil of Artemisia absinthium found that it contains at least 28 components representing 93.3 percent of the oil. The main components are β- pinene (23.8 percent) and β- thujone (18.6 percent).

While wormwood is effective, thujone has the potential to be poisonous, which is why it’s crucial to use high-quality products you trust. Distilling the herb in alcohol increases the thujone concentration, which is why absinthe is banned in the U.S.

The active compounds in wormwood include:

The benefits of using wormwood, whether as a tea, tincture, ointment, or extract, are significant.

Wormwood is used to eliminate intestinal worms, including pinworms, roundworms and tapeworms. Pinworms are the most common worm infection in the U.S. with pinworm eggs spread directly from person to person. Roundworms, or nematodes, are parasites that also infect human intestines, and tapeworms are long, flat worms that infect animal and human intestines.

A research study conducted in Germany found that participants experienced an improvement in symptoms of Crohn’s disease by taking wormwood. The study included patients who were taking steroids for the disease. The initial stable dose of steroids was maintained until week 2, after that a defined tapering schedule was started so that by the beginning of week 10 all the patients were steroid-free.

Researchers found that there was a steady improvement in Crohn’s disease symptoms in 18 patients (90 percent) who received wormwood in spite of the decrease of steroids. After eight weeks of treatment with wormwood, there was almost complete remission of symptoms in 13 (65 percent) patients in this group as compared to none in the placebo group. This remission lasted until the end of the observation period, which was 20 weeks (12 weeks later), and the addition of steroids was not necessary.

If you have Crohn’s disease, it is worth talking to your doctor about this study.

Every year, salmonella is estimated to cause 1 million food-borne illnesses in the U.S. alone, with 19,000 hospitalizations and 380 deaths. E. coli is another concerning type of bacteria that can cause a range of issues from diarrhea to urinary tract infections to pneumonia and other illnesses.

In addition, wormwood has been shown to kill fungi. Research shows that essential oil distilled from the aerial parts of Artemisia absinthium inhibited the growth of a very broad spectrum of tested fungi. Wormwood essential oil also showed antioxidant properties during testing.

Many times, a natural remedy like herbals can treat SIBO just as well or even better than prescription medications. Today’s typical treatment of SIBO is oral antibiotics that sometimes work and sometimes don’t work.

Herbal products that contain antimicrobial herbs like wormwood, oregano oil, thyme and berberine extracts have been shown to provide broad-spectrum coverage against the types of bacteria most commonly involved in SIBO.

In one study, 46 % of patients who received herbal therapy showed no evidence of SIBO on follow-up tests compared to 34 percent of rifaximin users. Adverse effects reported among those taking rifaximin included anaphylaxis, hives, diarrhea and C. difficile colitis, while only one case of diarrhea and no other side effects were reported in the herbal therapy group.

Malaria is a serious disease caused by a parasite that is transmitted by the bite of infected mosquitoes and invades human red blood cells. Artemisinin is an extract isolated from the plant Artemisia annua or sweet wormwood.

Artemisinin is an herbal drug that’s the most powerful antimalarial on the market. It’s known for quickly reducing the number of parasites in the blood of patients with malaria. The World Health Organization recommends it as a first-line treatment.

According to recent studies, artemisinin can battle iron-enriched breast cancer cells similar to the way it eliminates malaria-causing parasites, making it a potential natural cancer treatment option for women with breast cancer.

Cancer cells can also be rich in iron since they commonly soak it up to facilitate cell division. Researchers in a 2012 study tested samples of breast cancer cells and normal breast cells that had first been treated to maximize their iron content. The cells were then treated with a water-soluble form of artemisinin, an extract of wormwood.

The results were noteworthy. The normal cells showed little change, but within 16 hours, almost all of the cancer cells were dead and only a few normal cells were killed.

Absinthe is a botanical spirit made from wormwood, anise, and fennel, but wormwood has many uses beyond a potent potable. It’s used to eliminate intestinal worms, especially roundworms and pinworms, and it’s the source of the key ingredient for the herbal drug artemisinin, which is the most powerful antimalarial on the market.

Wormwood is commercially available at health stores and online as an essential oil, as well as in capsule, tablet, tincture, and liquid extract forms. It can also be used in fresh or dry form to make an infusion or tea.

Look for high-quality products from well-established companies like Soul CBD. Wormwood is effective, but it should be used with caution. Consult with your doctor about the dosage and follow the instructions carefully.