Protecting the Brain With Exercise 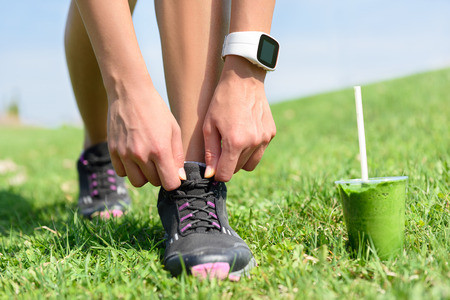 Aging and diabetes are two risk factors for cognitive decline. Worldwide, the population is aging,1 and metabolic syndrome increases with age.2 This has sparked intense interest from patients, caregivers, and medical professionals for strategies to stem the tide. Exercise is one simple, yet effective, strategy. A recent meta-review adds credence to the need for lifestyle and exercise prescriptions in primary care, including activities such as aerobic exercise, cycling, resistance training, tai chi, yoga, and others, based on their effect upon the brain.3

How does exercise affect the brain? In one study on older adults, areas of the brain most associated with aging and cognitive decline—the prefrontal region, governing executive function, and the temporal region, involved in long-term memory—were the same areas most affected by exercise.4 Exercise increased the volume of the hippocampus, slowing age-related brain atrophy and the progression from mild cognitive impairment to Alzheimer’s disease. Exercise also increased the volume of gray and white matter in the frontal and temporal lobes of the brain. In addition to these salutary physical changes, seniors who consistently engaged in some form of physical activity were better able to maintain their cognitive function, focused attention, and memory compared to their sedentary peers.4

Exercise also changes chemical signaling in the brain, even in the short term. An analysis of non-insulin dependent elderly diabetic men examined the effects of exercise on neurotrophic factors.5 Participants engaged in 30 minutes of either submaximal cycling or exergaming, with similar effects on heart rate. Cyclistts had a 20% increase in brain-derived neurotrophic factor, a key protein in neuroplasticity, and a 14% increase in vascular endothelial growth factor, key in neurogenesis. This suggests that different types of exercise may be useful for different conditions.5

Overall, the benefits of exercise are indisputable. For patients concerned about or in the midst of cognitive decline, exercise may be particularly beneficial.